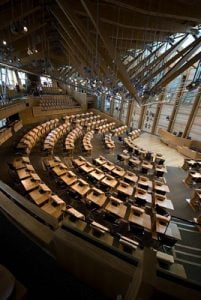 It has now been established that there will be a Net Zero Energy and Transport committee in the new parliament. We are pleased to see that transport is now more clearly represented, and that it has been formally linked with energy and climate. As Transform’s Director Colin Howden notes: “There’s zero chance of hitting our climate targets without action on transport. As such, the link with energy policy is crucial”.

In partnership with seven other organisations, we wrote to the Scottish Parliament’s Presiding Officer and Deputy Presiding Officers to call for transport to be given adequate scrutiny in the new Session of Parliament. Together, our letter represents  a wide range of transport interests including bus operations, car sharing, cycling infrastructure, rail, public transport passengers, , and sustainable transport policy.

We have been tracking developments at Holyrood closely and, like everyone else, we were somewhat surprised that the Scottish Greens and the SNP have gone into negotiations about a formal partnership in Holyrood. We await developments here.

Our response to the Air Passenger Duty consultation

Earlier this week we responded to the UK Treasury consultation on the future of Air Passenger Duty (APD). Whilst Ryanair and other airlines have been calling for APD to be scrapped entirely, we have strongly argued that APD should be continued and, in fact, increased in order to tackle the impacts of aviation on climate change.

Transform gets involved with the Active Travel Conference 2021

We were excited to have two speakers at this year’s National Active Travel Conference.

Our Enterprise Manager, Elspeth Wray, made a presentation on the topic of ‘Access to bikes — a nationwide survey of bike schemes’. This research was carried out by Transform Consulting for Cycling Scotland.

Also presenting at the conference was Jamie Wylie, Transform’s former Communication and Policy Officer. Jamie presented the ‘Active Recovery’ report that he had written for us on ‘Locking in the benefits of lockdown’. His report is available for download here.